By Ashby Jones and Joe Palazzolo

State lawmakers across the U.S. have started 2012 with a controversial message to their judges: keep foreign laws out of our courtrooms.

Twenty-one states are considering measures that would prohibit judges from applying the laws or legal codes of other nations in a wide variety of cases. Three states—Tennessee, Louisiana and Arizona—recently added versions of such laws to the books, while a fourth—Oklahoma—worked a similar change into its constitution in 2010. 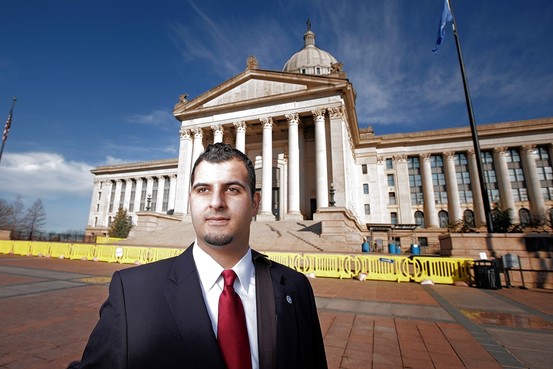 The movement is motivated largely by a handful of organizations that claim Islamic Sharia law and, to a lesser degree, laws of other nations, are creeping into courtrooms and American life, especially in divorces and child-custody disputes. Sharia, loosely defined as a set of moral and religious principles in Islam, is woven into the legal systems of many Muslim nations. It covers issues ranging from what to eat and drink to structuring a loan to setting up an inheritance and divorce, among other things.

Virginia Delegate Bob Marshall, a Republican, said he decided to introduce a bill last month after hearing from constituents. “I heard concerns from people when I went door-to-door last year about foreign influence in U.S. law,” he said, though he didn’t recount any specific instances raised by constituents.

Opponents of the “American laws for American courts” movement argue that laws barring outside influences are unnecessary, unconstitutional and motivated by anti-Muslim bigotry. “It’s an election year, and far too often we’re seeing this kind of rhetoric playing on the fears of the voters,” said state Sen. Nan Rich of Florida, a Democrat. 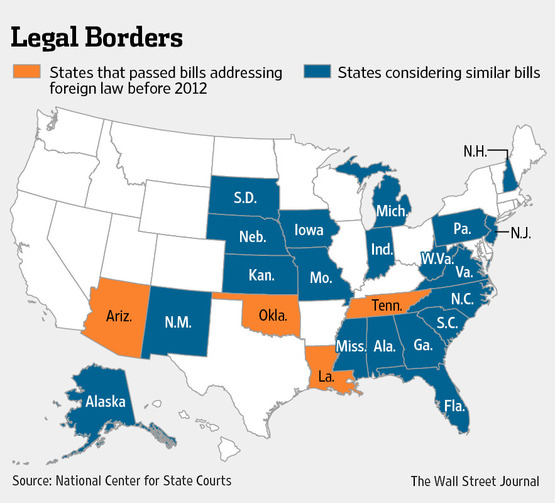 Concerns about Sharia have been expressed in recent months by Republican presidential hopefuls Newt Gingrich and Rick Santorum. Mr. Santorum has called Sharia “incompatible with the civil code of the United States.” Last month, Mr. Gingrich told a South Carolina town-hall audience that he would be open to supporting a Muslim-American president as long as the candidate renounced Sharia law.

Backers of the bills, which include conservative organizations Act! for America and the American Public Policy Alliance, point to several dozen cases spanning the past 30 years, many of which deal with a common theme: whether a U.S. court erred in upholding a child-custody or divorce decision made in a Middle Eastern nation. Supporters concede that the problem isn’t yet widespread, but as Florida state Sen. Alan Hays puts it, they “want to get ahead of the problem before it spreads.”

Skeptics of the prohibitions counter that foreign statutes and international law, which concerns dealings among nations, have never been binding on state or federal courts. Judges occasionally cite in their opinions nonbinding materials for context or to illustrate points. In a 2005 Supreme Court opinion that concluded it was unconstitutional to execute juvenile offenders, Justice Anthony Kennedy wrote that “the opinion of the world community, while not controlling our outcome, does provide respected and significant confirmation for our own conclusions.”

Last month, a federal appellate court in Denver, in upholding a temporary injunction postponing Oklahoma’s amendment banning the use of Sharia and foreign law generally, said it likely violated the U.S. Constitution’s establishment clause, which prohibits laws giving special treatment to one religion over others. A trial court has yet to issue a final ruling on the challenge to the amendment.

While the pending bills don’t mention Sharia or any other system specifically, Muslim groups and others say that fact does little to mask the laws’ true design.

“Removing ‘Sharia’ [from proposed laws] was purely a political move,” said Muneer Awad, the plaintiff in the Oklahoma case and the head of that state’s arm of the Council on American-Islamic Relations, an advocacy group. “The goals are all the same: to target Islam.”

Those making an effort to stamp out the application or validation of foreign laws in the U.S. system cite several dozen cases from around the country in which judges have had to decide whether to heed court decisions made in other countries that may have been influenced by Islamic law or traditions.

In one oft-cited custody dispute from 1996, a Maryland state appellate court deferred to a Pakistani court order awarding custody of a 12-year-old girl to her father in Pakistan, rather than her mother in Maryland.

The Maryland court held that the Pakistani court had, in fact, looked to the “best interests of the child,” even though it had also invoked an Islamic notion known as Hazanit, which gives preference to the father in custody cases. A dissenting judge criticized the six-judge majority for failing to more heavily weigh the Pakistani court’s suggestion that, if custody were given to the mother, the child would live in an “un-Islamic society.”

“It’s very illustrative of the type of decision that would never have happened” with the proposed laws in place, said Stephen Gelé, a New Orleans lawyer and spokesman for the American Public Policy Alliance, which drafted the model law adopted by many states.

If there were such a law, explained Mr. Gelé, the Maryland court would have been forced to consider whether the mother’s “fundamental rights” were violated by the Pakistani court’s decision before deferring to it.

Another example offered is a 2009 New Jersey dispute that involved a Muslim couple who had moved to the U.S. from Morocco. A trial court didn’t consent to the wife’s request for a restraining order despite finding that her husband had assaulted her. The court’s rationale: The man believed it was his religious right to have nonconsensual sex with his wife, and he lacked the requisite criminal intent needed to justify the order.

An appellate court reversed the lower court’s ruling in 2010 and granted the restraining order. However, Mr. Gelé said the trial court’s decision shouldn’t be overlooked: “Trial judges need to get these cases right, because not everyone has the money to appeal.”

Write to Ashby Jones at ashby.jones@wsj.com